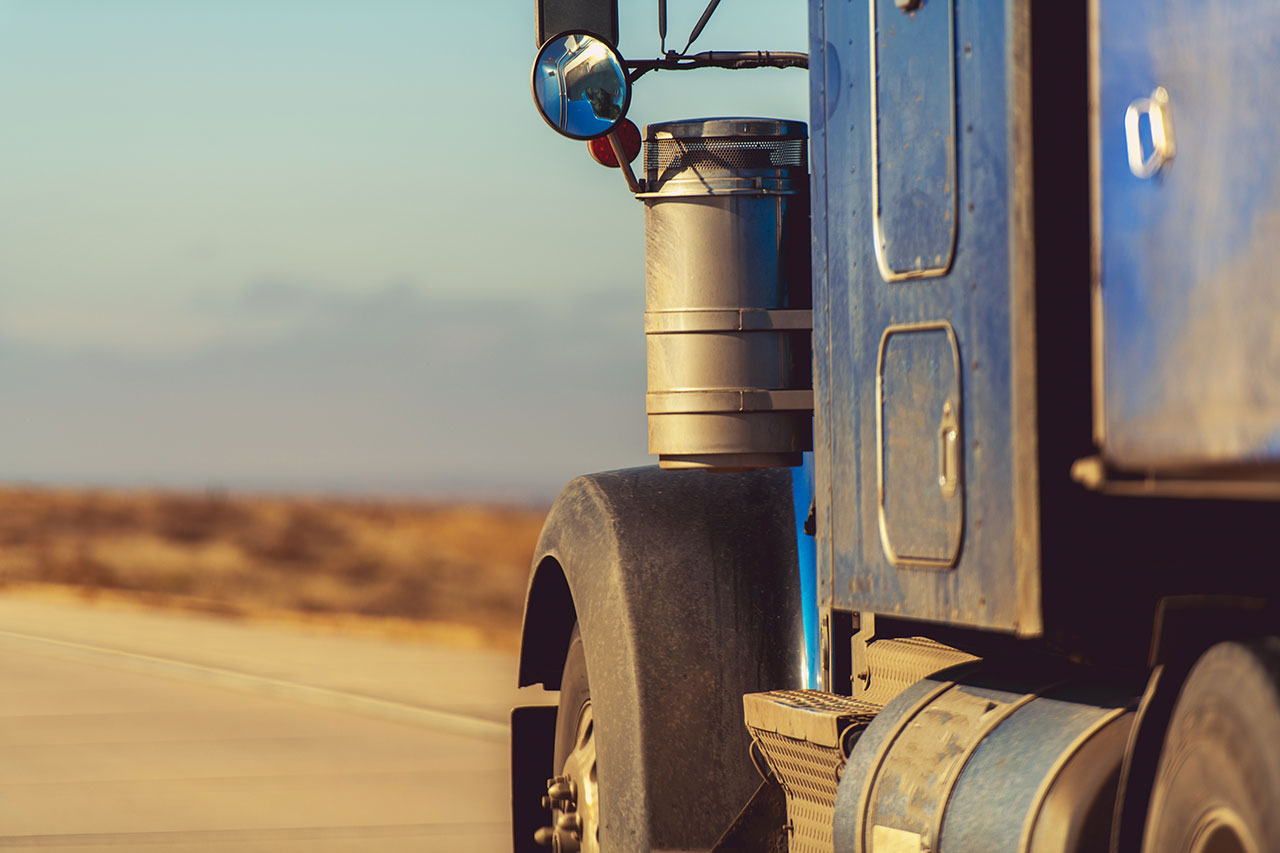 In 2020, a formal standard will be enforced by the DMV where any 2004 model year or older model year diesel vehicle with a GVWR of 26,000 pounds or less will be denied registration as of January 1. Heavier diesel vehicles with a 2000 model year engine or older will also be denied.

“It is a perfect storm” according to Matt Schrap, VP of Government Programs for Crossroads Equipment Lease and Finance. “Hundreds of fleets have received letters in the mail telling them they can’t register their truck, the main thing I hear from these folks is, ‘I had no idea.’”

Currently, fleets are being prevented from registering vehicles that have been tagged by CARB for non-compliance. This is any heavy-duty diesel truck over 26,000 pounds GVWR that is not equipped with a diesel particulate matter (PM) control device from either Original Equipment Manufacturer (OEM) or an aftermarket provider.

2008 through 2010 trucks equipped with 2007-2009 engines have factory installed PM Devices, these OEM equipped trucks are legal to operate in California until January 1, 2023 when the final standards kick in for the CARB On-Road Rule.

In the interim, vehicles older than 2008 will have had to install an aftermarket PM device on any 1996-2006 engines to comply starting in 2012. Vehicles with a GVWR of 26,000 pounds or less have had to turn over directly to 2010 model year engine standards which became available for purchase in the 2011 truck model year. (See Tables Below). 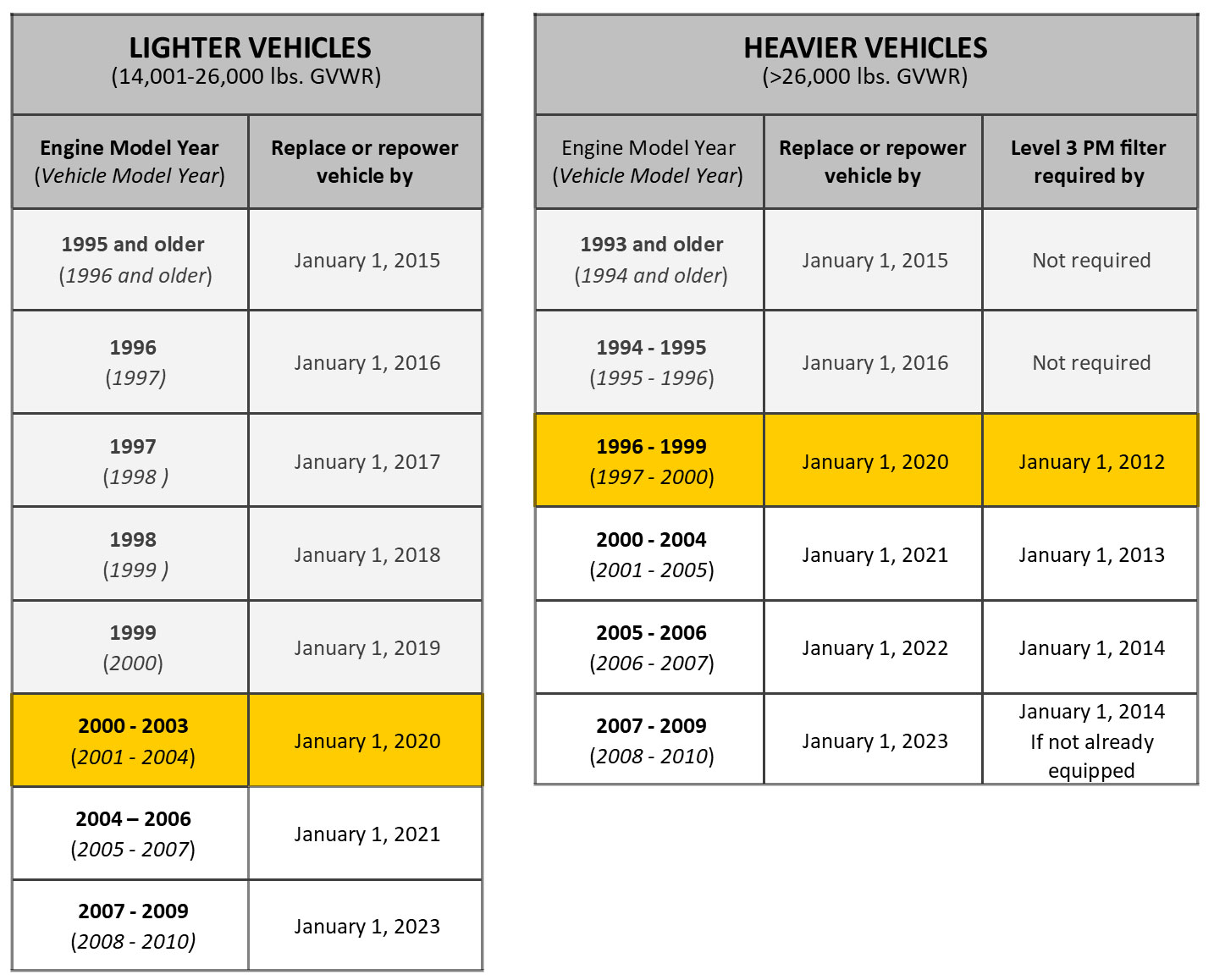 For fleets that did not install the aftermarket devices for compliance are now having their registrations denied and are facing increased liability from audits performed by CARB for compliance.

“We have seen good companies left with very few options when it comes to CARB compliance. With the upcoming Registration ban, it is going to get ugly.” Added Schrap who has been working with fleets on CARB compliance and rule development for close to 15 years. “We here at Crossroads and our Velocity Truck Center partners have done all we can to promote the varying opportunities for truck turnover incentives and government guaranteed financing, It’s not all bad when it comes to the in-use rules.”

For those fleets who met the schedule for compliance through retrofitting or the purchase later model year trucks, grants and incentives have helped propel many companies well past the compliance dates. Program such as Proposition 1B and the Carl Moyer Program have replaced thousands of older diesel vehicles with new, clean diesel and alternative fuel platforms.

With the final set of standards drawing closer, fleets have been searching for specific direction in how to navigate the CARB requirements. Companies like Crossroads Equipment Lease and Finance, the top lender in the On-Road Heavy Duty Vehicle Loan program administered by the state treasurer’s office, have invested in resources to help fleets achieve compliance or interface with CARB though any pending enforcement actions.

A list of participating on-road loan program lenders is available from CARB, but the agency does not provide any endorsements or recommended pathways for compliance assistance. According to Schrap, “The state can’t give a gold star to their lending partners or the “consultants” who claim CARB expertise. However, our record speaks for itself, with close to a quarter of all enrolled loans having been originated and enrolled by Crossroads since the program’s inception, along with the millions in incentive funds we have secured, I’d say the choice is obvious, and when you speak to one of our team members, you will know why.”

When asked for any final thoughts on the upcoming standards, Schrap simply added, “All of the standards and programs and acronyms can be very confusing, Crossroads is here to help”.

For more information on the on-road loan program, or upcoming CARB standards, visit arb.ca.gov/truckstop. To learn more about Crossroads Equipment Lease and Finance, or to speak to Mr. Schrap or one of the team members about your fleet, visit www.crlease.com or call 877-594-2880.